"I've been a fan of Roman and his work for a quite a few years and I can't imagine him sitting at home stroking a shotgun while searching for the IP's of the people that posted."

I had to do it. Just had to.
For the record, I have no problem with people posting, but others made a good case against it so now it is changed. I deleted all the unfun stuff.

I start drawing out some of the new Lenore strips next week.
Peace out, keep it real, G-monies.

Eek. First off, let me sincerely apologize for not updating this for such an extended period of time. In my defense, I have been REALLY damn busy. I haven't even been able to play my beloved World of Warcraft for a month now. That should tell you something. My rank was Champion and now I'm scared to see what it has fallen to. Oh well.
BUT I should have checked this sooner to see the out of control factor that has evolved from the ooze of my absence, and for that I am sorry.

So, what's going on that has kept my focus averted so? Several things at once. I'm working on Samurai Sloth. I decided to make it a graphic novel instead of 2 comic books. A full graphic novel is a butt load of work. It's also in color so that equals more time since I insist on coloring everything myself. I'm funny like that.
I've been writing scripts for several books. That stuff is just mentally taxing. The books are The Bear and The Belly Lint, It Ate Billy On Christmas, Underfluff, and Peter the Pirate Squid. I also, just the other day finished a HUGE project that will remain secret for now. Shhhhhhh....
I've been working on my "Art of Dirge" book and doing pieces for an upcoming art show.
I'm getting ready to go back into production on my short film, Biter, having just received some addition funding. Biter is my movie that will be free to everybody once it is finished. It is a labor of love and a wonderful addition to my director's reel. I've brought on my good friend Nathan Cabrera, to oversee some of the more demanding puppet making aspects and effects of this film. The whole point of this thing was to try and do the impossible for a low budget, do it yourself movie, and we are somehow doing it.

As for the Lenore daily comics, the very point of this community, I've written the next 28 comics strips. As soon as I can, I'll start drawing them again. I promise. When I update with the new one, I'll change the settings so only I can post a new subject. Alrighty?

Until then, here is a random page of Samurai Sloth just for the heck of it:

The pinata story will continue but I spent all day yesterday helping a buddy set up his art show for tonight at Otis. So, in the meantime.... Valentines thing. 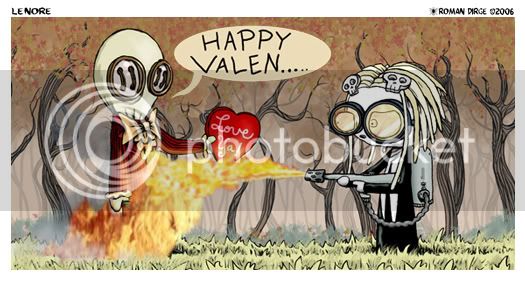 Wooooo beeee wooo be woo.
I'm excited about this. I've written a lot of Lenore comic strips as they would appear as a "daily funny". This will be the spot where I post them as I do them. I plan on it being a regular thingy, because I have dreams of someday having an actual book of these and I'm hoping this keeps me motivated. Of course, I had dreams of being muscle bound too, but hey, whatever...
I take about a year to do a full comic book of Lenore, so this is like my weird little way of keeping you kids hooked..... hopefully (does shifty eyes).
The first one, I put up before on my regular journal without divulging my true insidious intentions, so I start this night with that one plus the second so there is something new up. Some may be in color and others in black and white. Just depends on the mood I suppose.

And so the adventure begins....